Jules Verne, the grand voyager of the late 19th century, the literary explorer who, in his extraordinarily popular books, throws himself like a trapeze artist between past and future, between everyday life and a life of dreams – Bertil’s glass nowadays gives me recurrent reasons to return to. As at the present, at Galleri Glas, with the exhibition Surface Tension. Jules Verne published three titles in rapid succession: The Adventures of Captain Hatteras, Journey to the Center of the Earth, and the prophetic novel From the Earth to the Moon (prophetic because it appeared one hundred years prior to Apollo XI’s moon landing in 1969; also a journey by three men who had been shot into space in a capsule from Florida in the USA).

Has Bertil read Jules Verne? He has. But as he explains, he read Verne “as a boy with not much else to do”. The teen years are a very usual time for reading science fiction. Whether Bertil’s young life was struck in the same decisive manner I do not know. But, like the adventurous Frenchman who, in common with Bertil, was a curious traveller and explorer. Since the beginning of time Bertil has concerned himself with nautical vessels and with people in more or less fictional and crumbling landscapes. Over the years his journeys have become increasingly dark and dystopic.

Bertil Vallien’s world is, of course as much interior geographies as physical landscapes; as much narratives of the human condition as observations in concrete space. His first fragile clay boats from the 1950s (twigs and string included) in some strange way, are part of the same adventurous richness as the large, sandcast glass boats of recent times that measure metres in length. Solitary soul in a fragile vessel, ¬ the approach is the same.

The exhibition at Galleri Glas does not seriously change the way that I see Bertil Vallien’s world-famous glass art, but the presentation seems simpler. Here is the boat, the head, the glass block that encompasses dramatic compressions of life and death. On the walls there are a number of rusty metal squares with glass rods. Fluorescent light in shifting colours from behind the metal squares make even these pictures a form of maritime vessels, hovering a few centimetres from the wall behind.

We speak of glass art that opens a perspective into the molten glass’ own space and chemistry, but also into dark, mythical, seemingly apocalyptic narratives. The German artist Anselm Kiefer’s burnt up landscapes and his fascination with material and with fragments is highly representative of Bertil’s temperament and his way of working. Kiefer’s enormous studio in a Parisian suburb has the same raw industrial character as Bertil’s own workplace at the Kosta glassworks.

Since the birth of modernism at the end of the 19th century the surface of art contrasting with art’s depth/content has been the object of interminable discussions. As a title for the exhibition, Surface Tension is superb. Few materials are as concerned about their surface as glass. The lustre itself suffices as expression in that it reflects the entire spectrum of colours and forms. But Bertil entertains himself by literally turning the joint over. He eradicates the lustre of the glass with a sort of gravelly black coating. The lustre is, instead, the content beneath the rough skin. Bertil has mentioned how, on one occasion, an assistant happened to add one hundred (100!) times too much cobalt into a pot of molten glass. “The aim was to make the blue colour more intense. Instead we created a melt that became as black as tar; a new sense of space, a new black hole opened itself to him and his unceasing journey into the glass.

Whoever lowers their gaze into Bertil Vallien’s shimmering world of glass readily loses themselves in an almost weightless state of dizziness. The eye wanders among the bits and pieces that hindered their flight within the dark space of the glass. A head (a decapitated classical statue?) rests at the bottom while a ruined staircase leads the way down from a scorched landscape. There is something both factual (scientific) and wholly imagined (fiction) about the glass block. Which is also intersected by a pole or a vessel reminiscent of a submarine. Or (to use Biblical language) a staff penetrating the weakness of the flesh.

For me, who even in middle age can sometimes return to Jules Verne’s story about the centre of the earth, Bertil follows in the footsteps of the Icelandic scientist and alchemist Arne Saknussemm. He has joined Professor Lidenbrock and his nephew Axel who have crossed the ocean to Iceland during some summer months in the year 1863 with the intention of visiting the centre of the earth via the cryptogram that Saknussemm has left behind him.

Traces. Clues. Reconnoitring. A letter or a colour (red!) that sharpens our need or our enjoyment of context; arbitrary or not, but Bertil’s wold of frozen puzzle bits constantly inspires him to new leaps, new attempts to find forms of narrative that only exist in glass’ unique way of being.

But Bertil’s journey through all the melting points is more than this. Bertil’s glass does not seek to be anything other than glass. His glass does not illustrate anything else in that ingratiating manner that so irritates me with certain other of his colleagues; least of all are his objects easily digestible candy.

Only glass can behave like this. An intention that is a landscape that is a head that is a piece of glass whose history would seem to be primeval. In the middle of this extinguished universe an adult human figure in a foetal position.

Twenty years ago Bertil showed an exhibition at the William Traver Gallery in Seattle that had been inspired by the story of Moro, a Japanese man who, in his search for immortality, claimed to have been frozen inside a block of ice. Bertil, who was equally fascinated by water and by glass, took up the (true or invented?) story and let it lead him onwards on his own journey.Even though, at first glance, there seems to be a chaotic randomness in his blocks and cubes of life, it is actually a simple, almost abstract sense of peace that remains with us. The contrast between the transparency of glass and the almost impenetrably harsh darkness. Bertil’s fascination with glass has, over the years, has led him away from popular decorative items down into a shimmering, private sphere. He has become his own Saknussemm, his own explorer. His own centre. 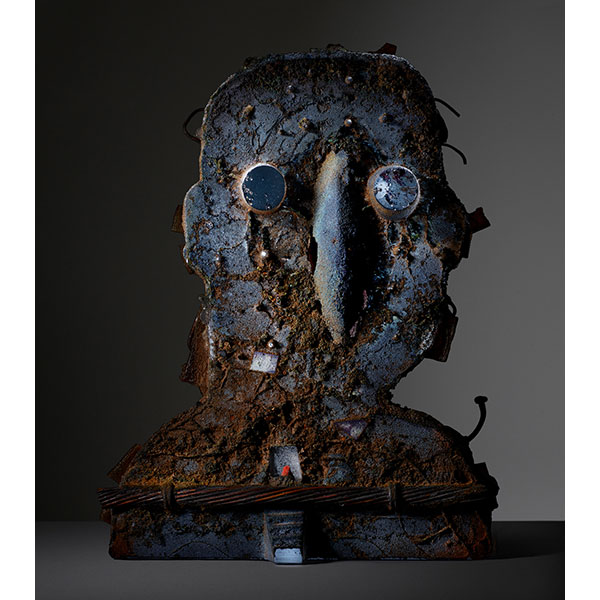 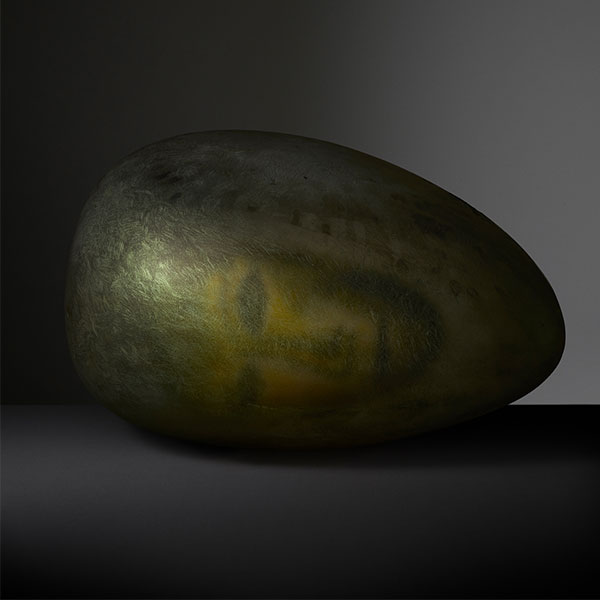 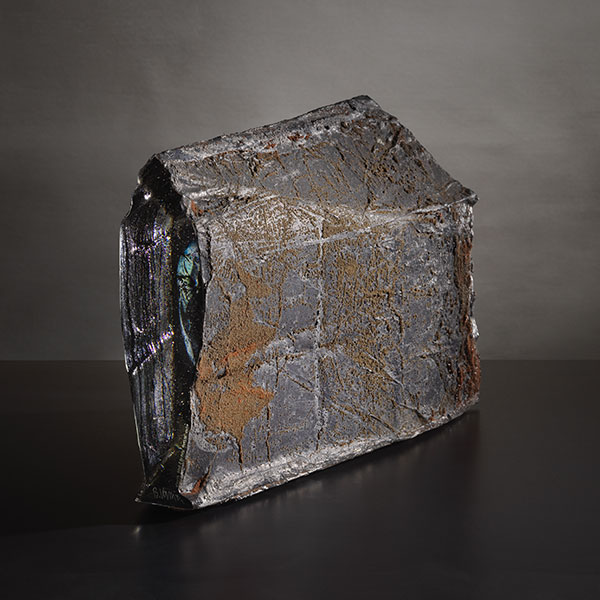 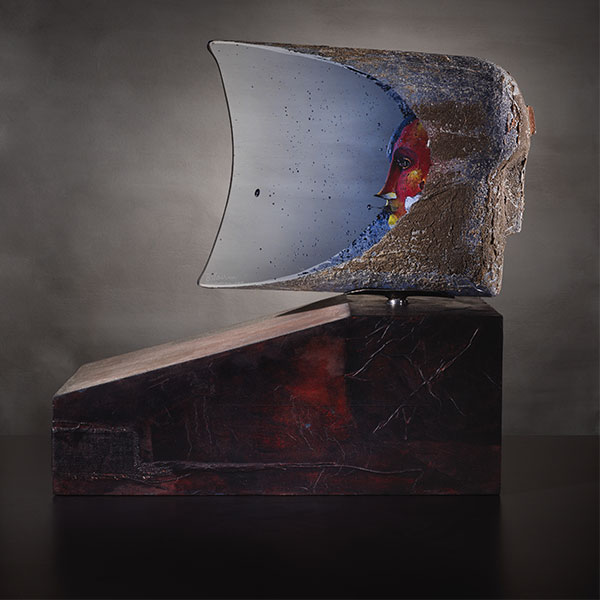 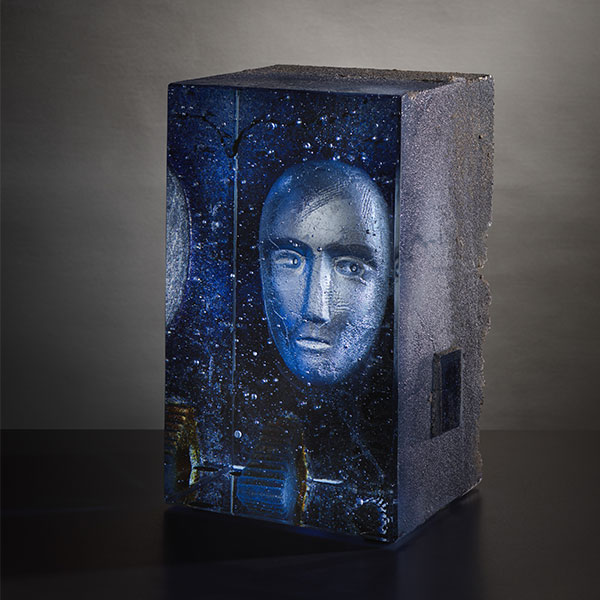 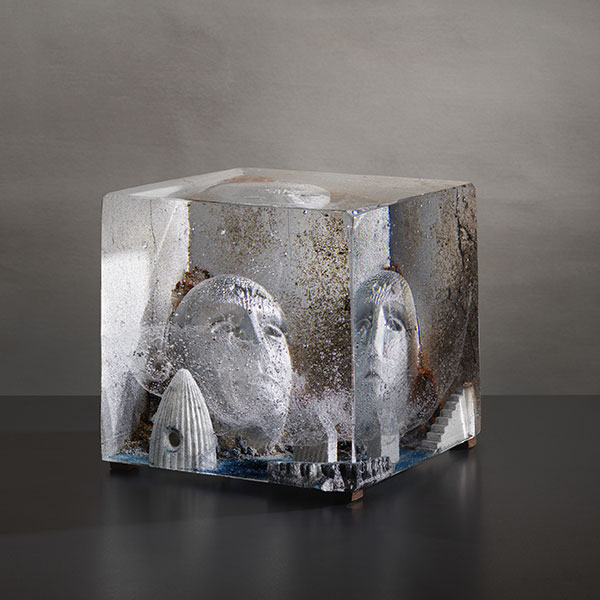 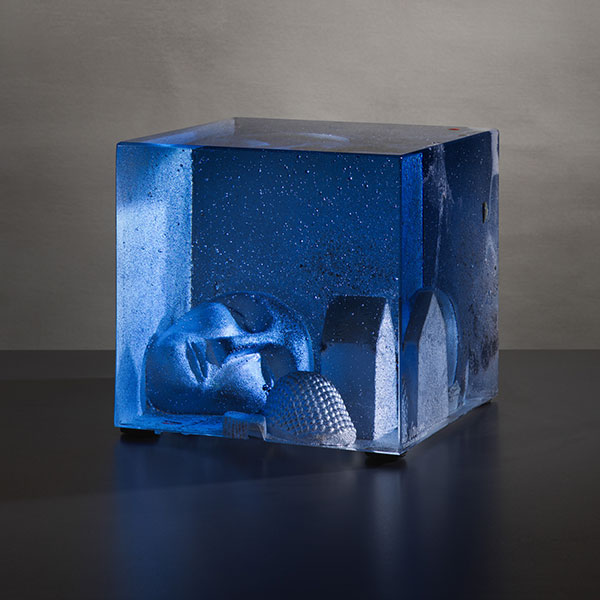 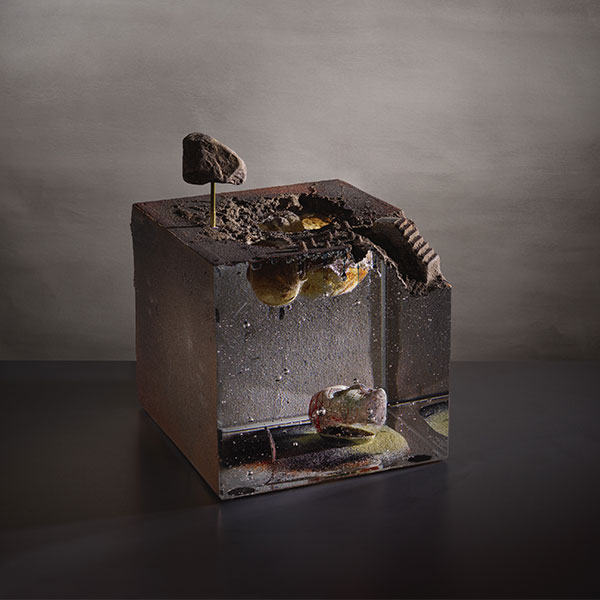 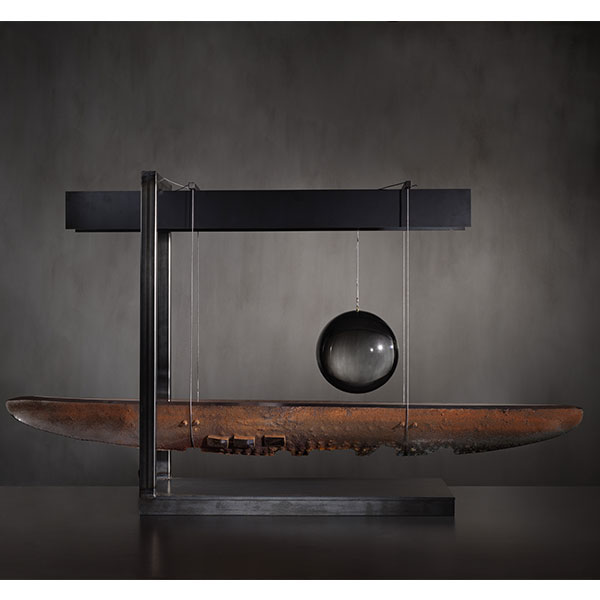 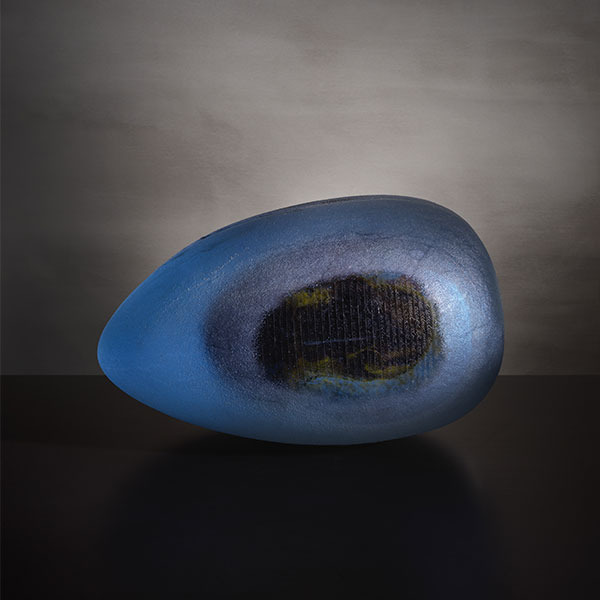 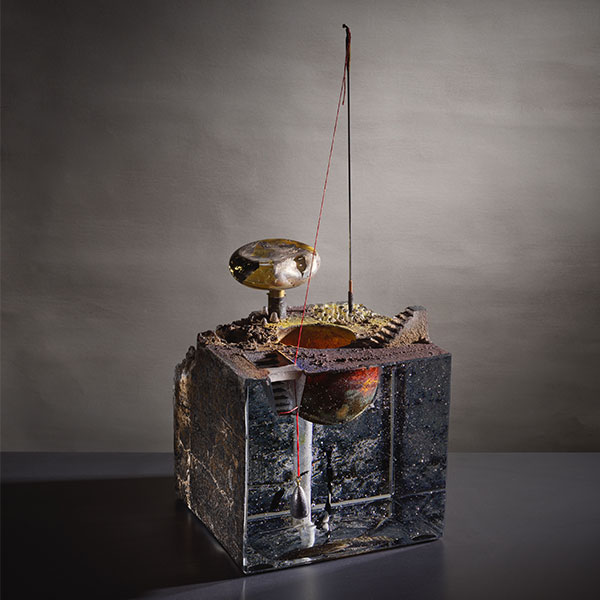 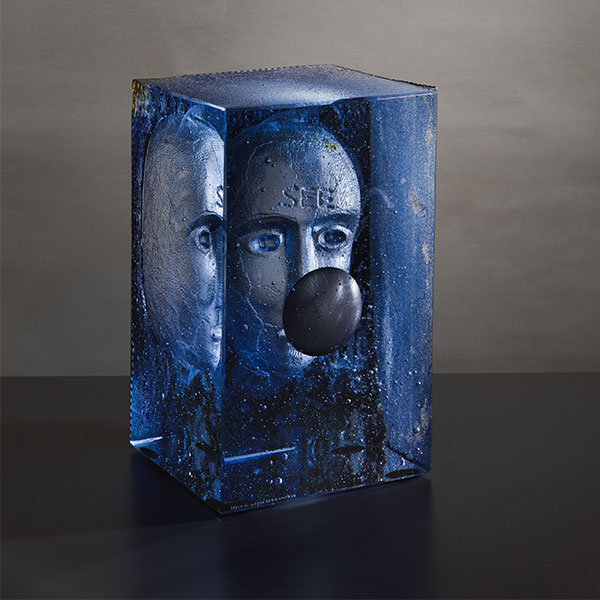 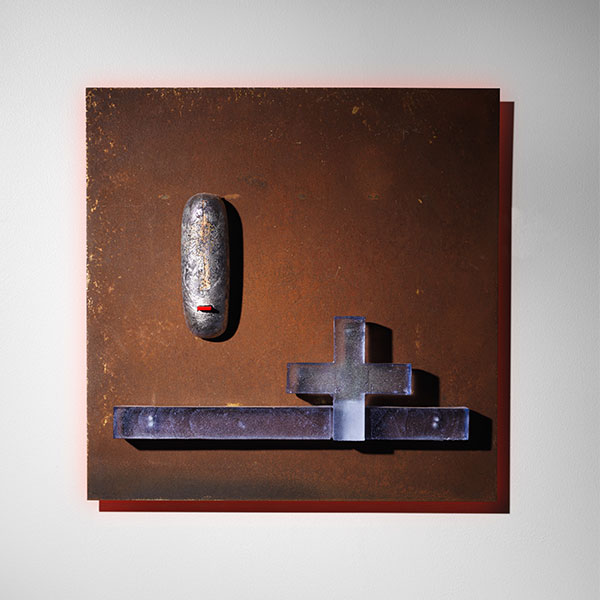 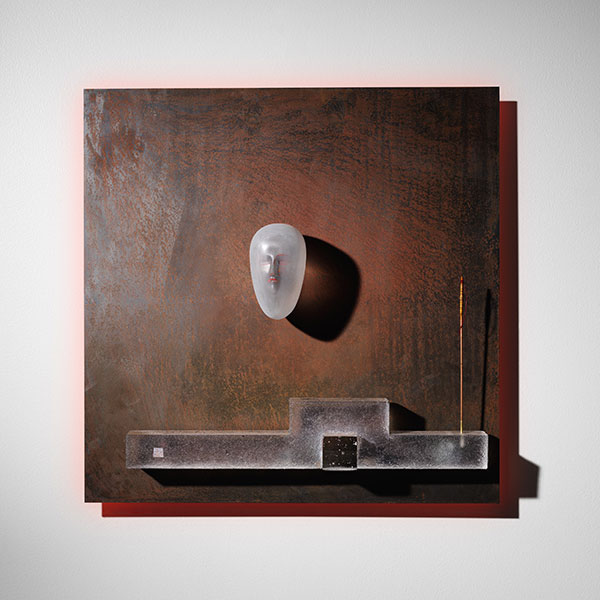 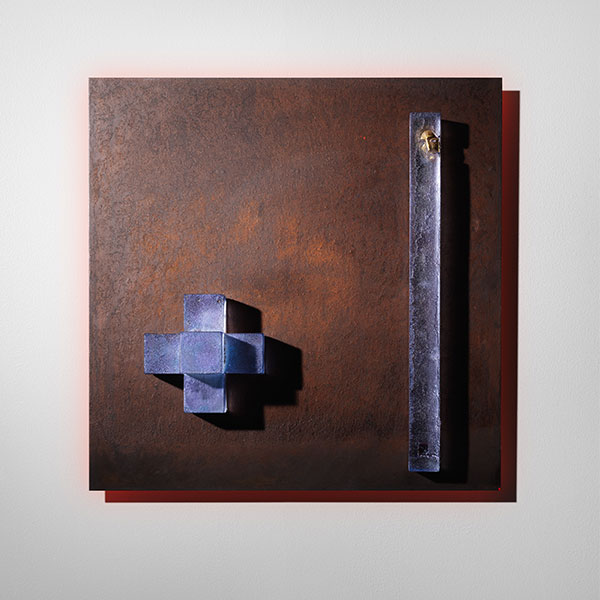 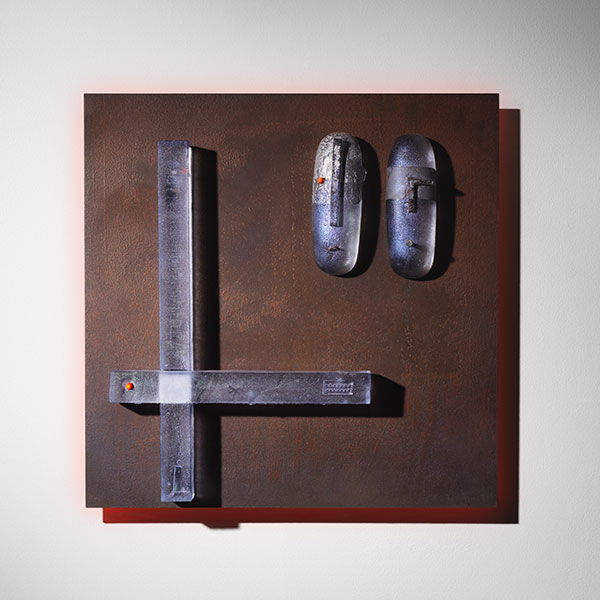 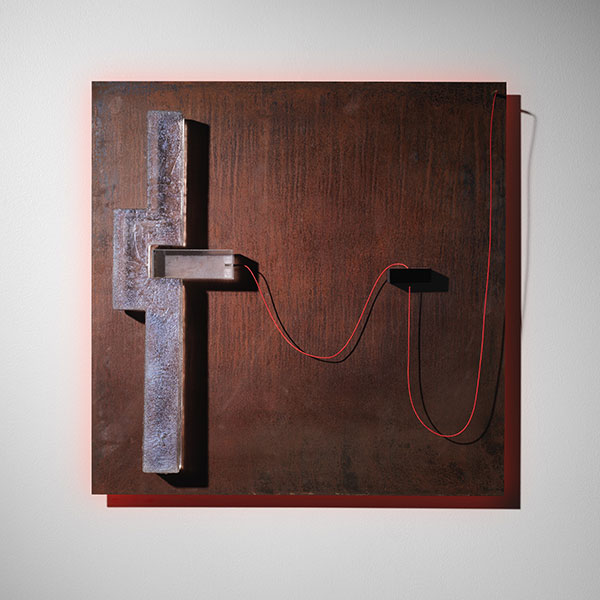 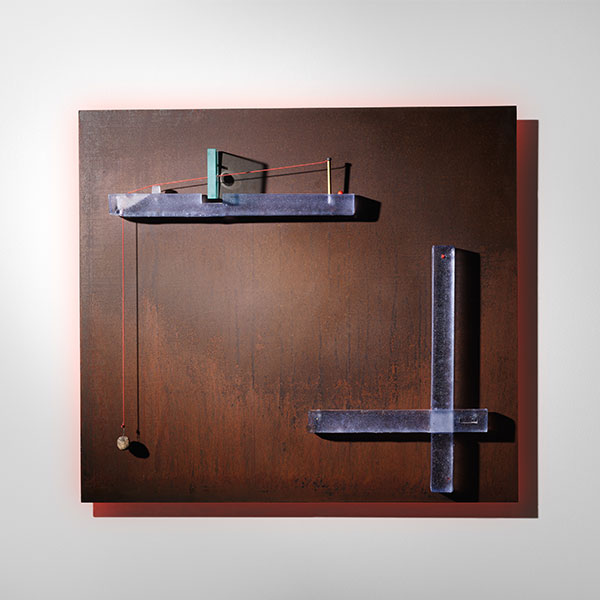 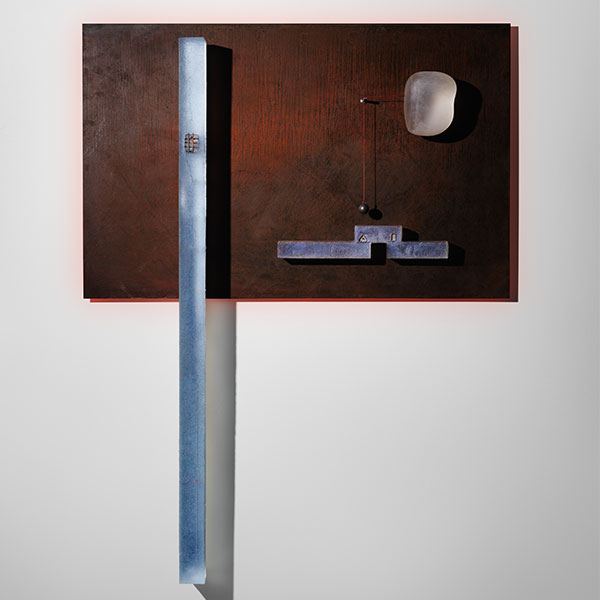 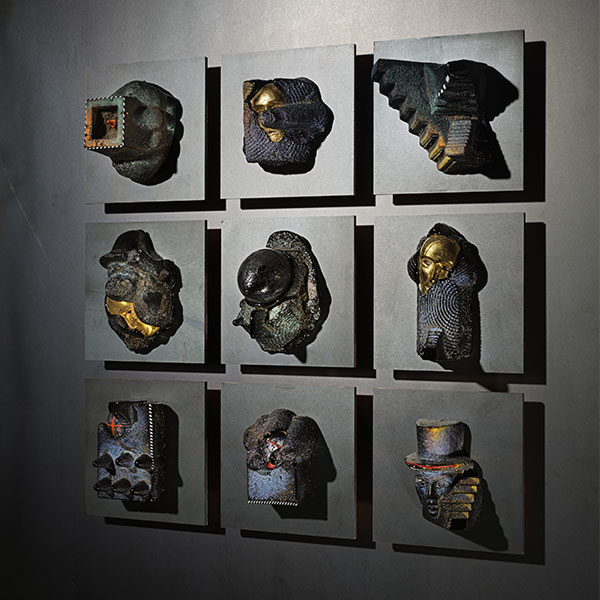 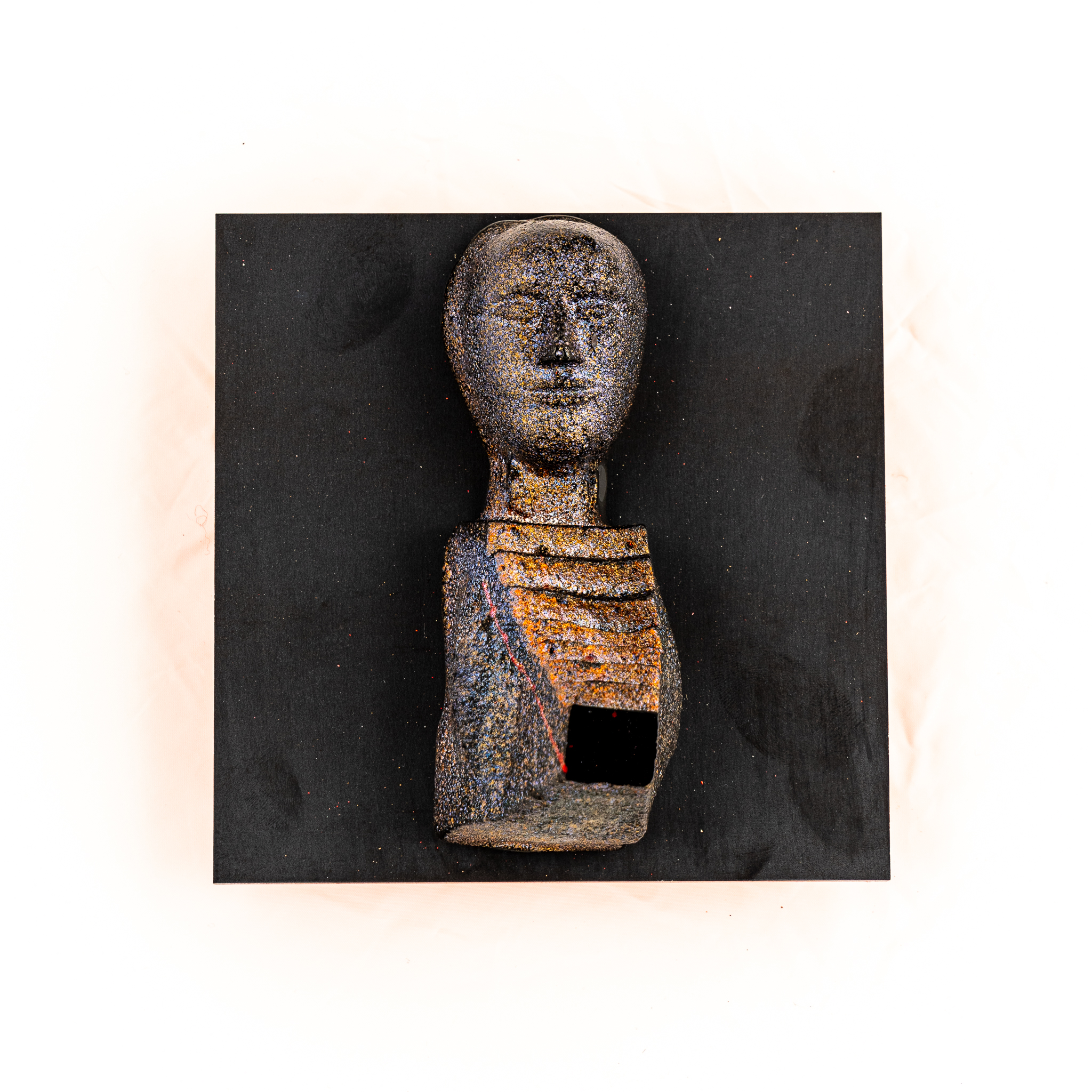 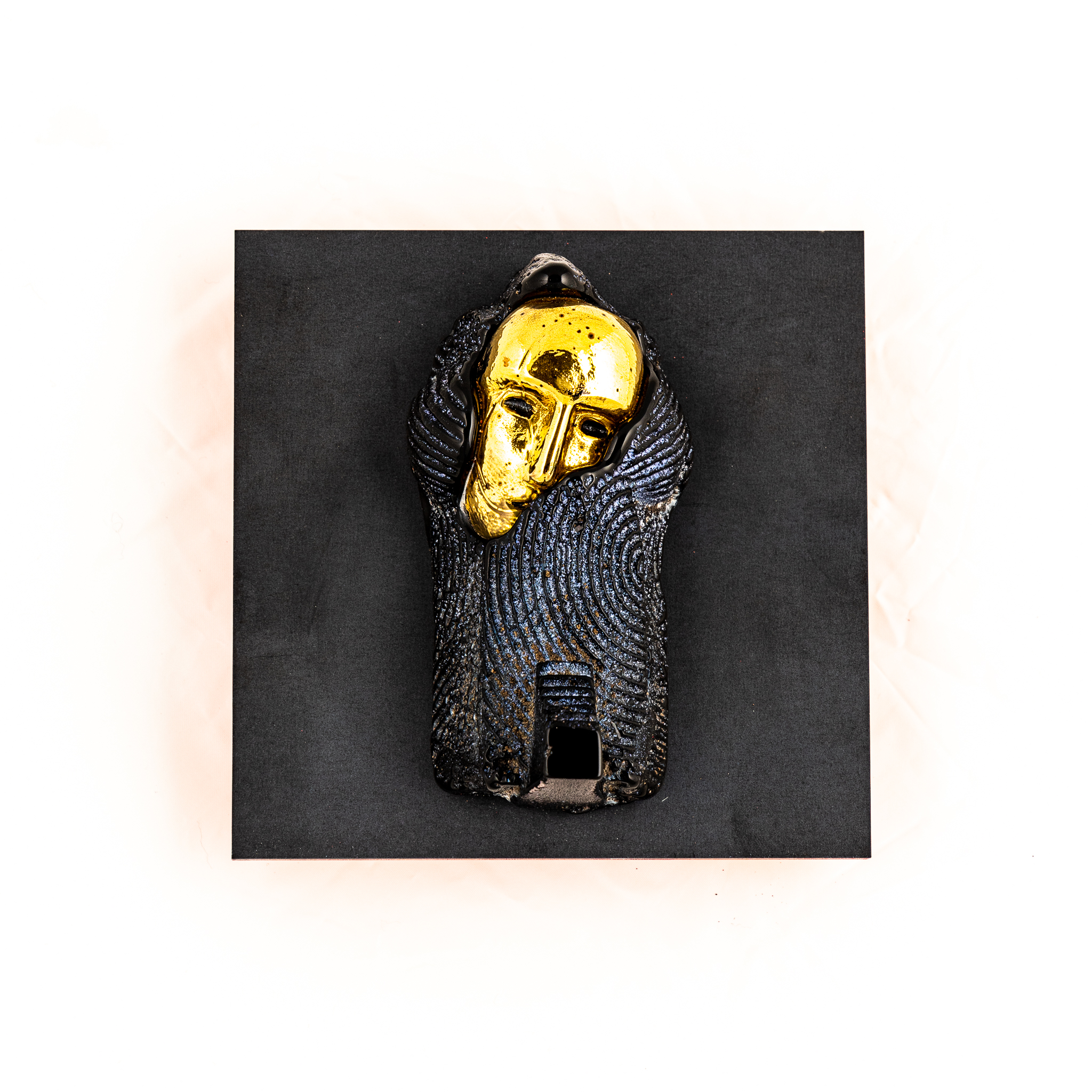 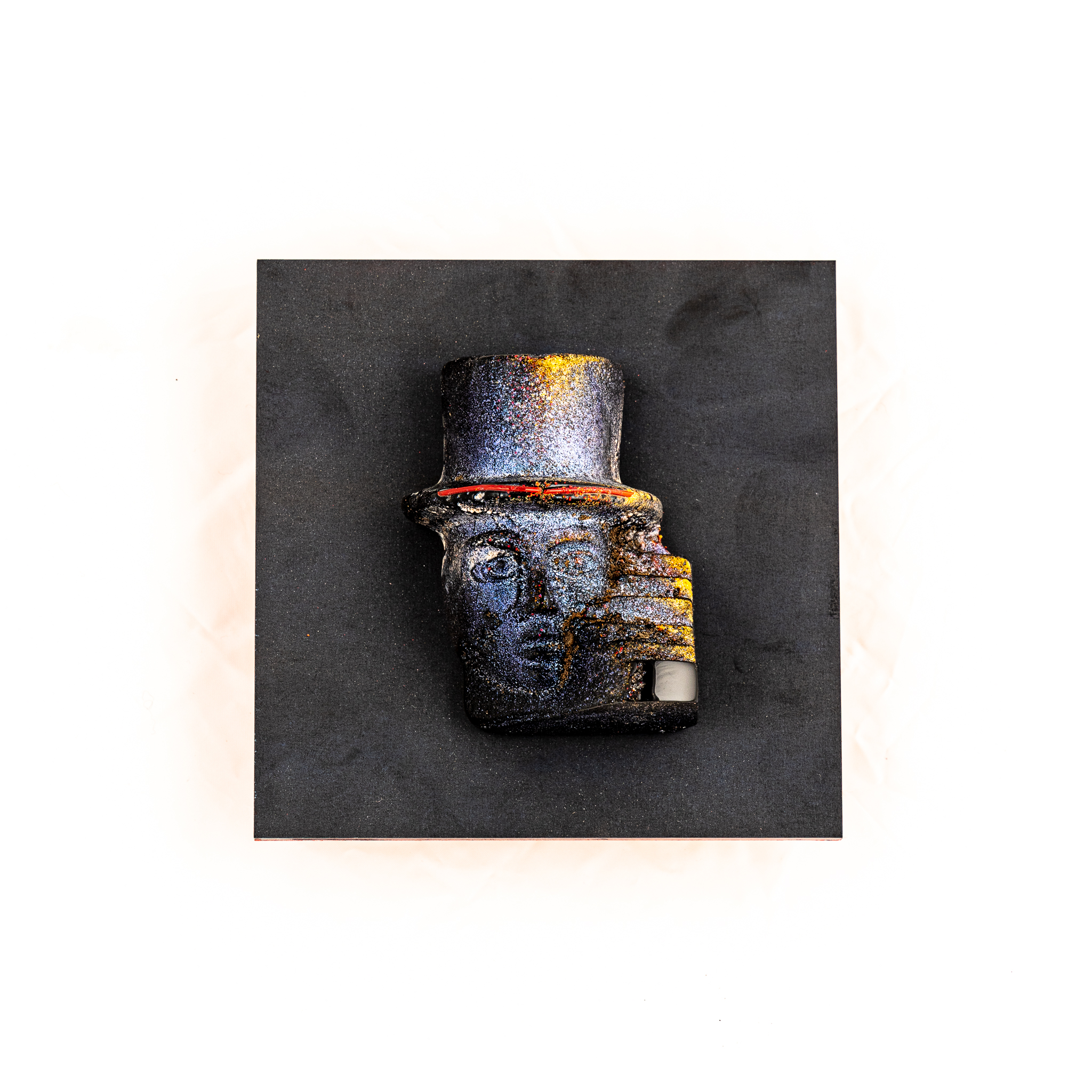 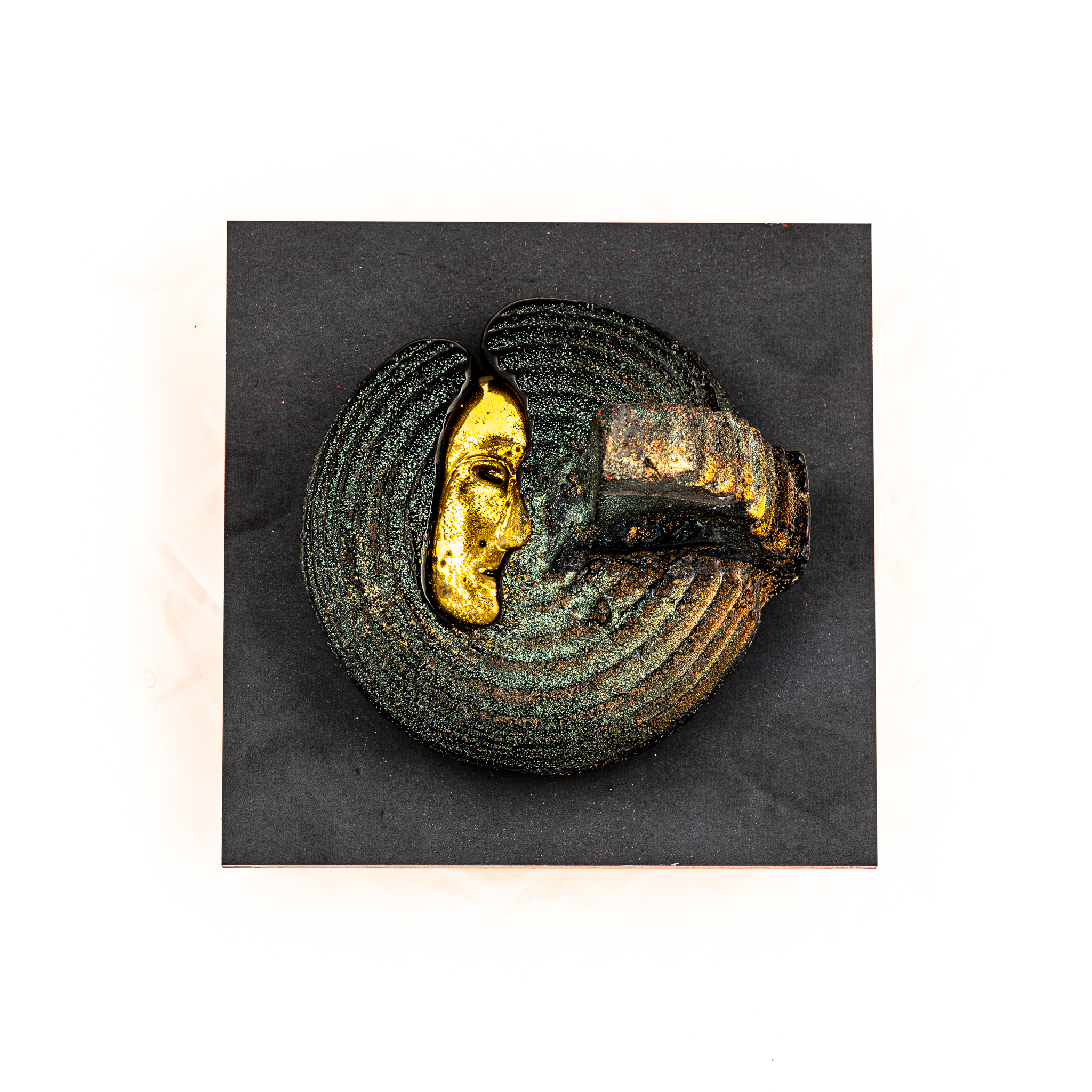 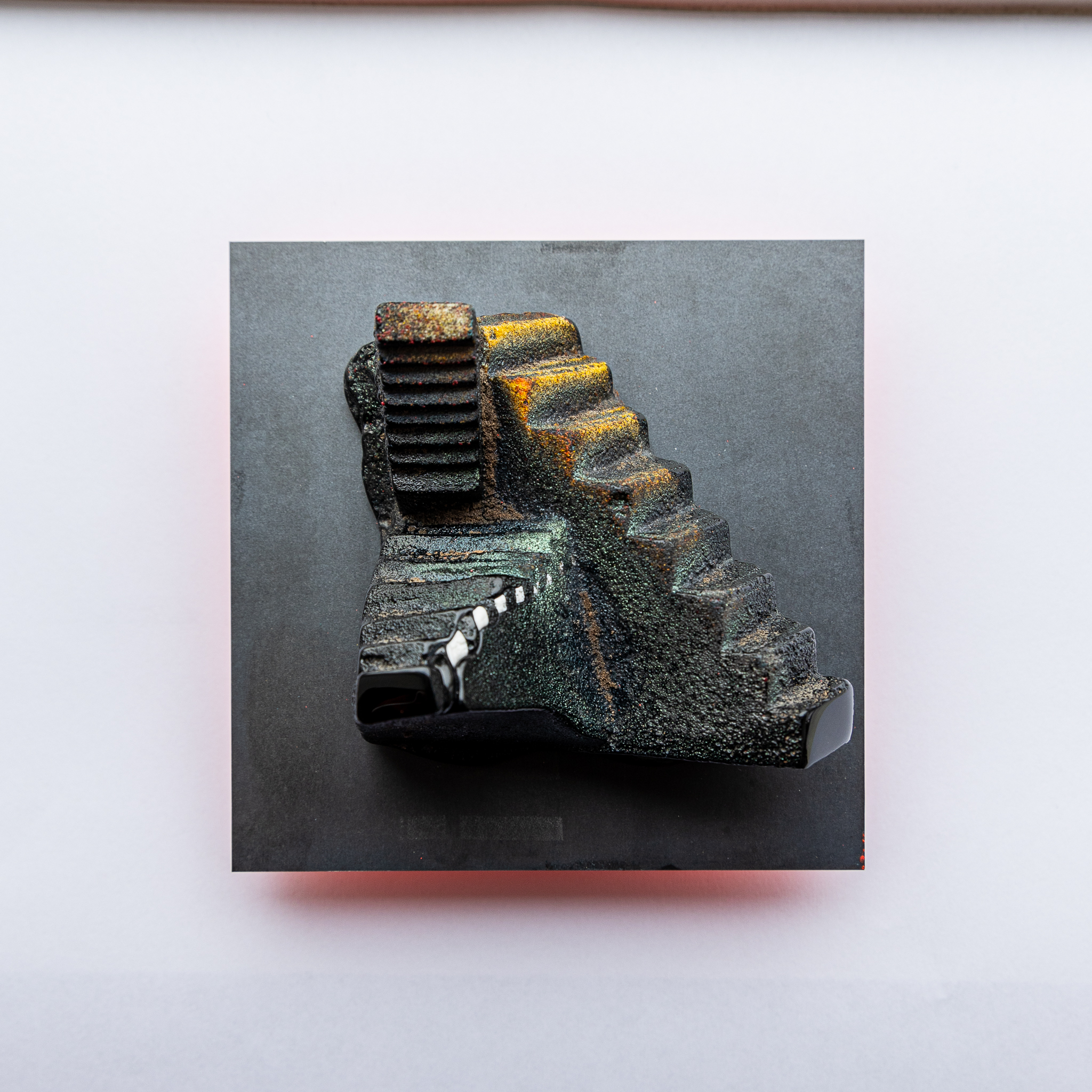 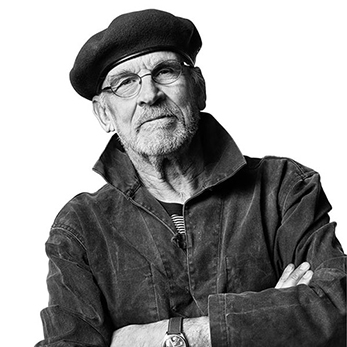