In turning to the work of Anders Wenngren a strong case may be made for the refinement and beauty of a lifetime quest, not for fame and fortune, but the perfecting of a unique vision both of the world and things, even of vision itself. His commitment to his art has been there since he was a student of architecture in Stockholm in the early 1970's. He was and is a trained architect. He set himself on a formal expansion of his education and looked at the world not through projective instruments, but by exploration with a camera and in painting.

What happens in the course of his work is an increasing sophisticating of the notion of representation, where it is not the re-presenting of what is seen externally that is paramount, but the way in which different seeing and media are brought together and show the viewing in itself. Thus work done in photography sets off responses in his painting, mostly in the medium of gouache which allow for solid plains of colour and simple over-laying, often resulting in a dramatic and abstract transcription of elements in the first view and then played out into elegant and beautifully conceived second and ultimately third views, as both photograph and painting are placed alongside each other. Eventually this resulted in his ‘photographs and gouaches’ book in which he puts together in a continuing diptych photograph on the left hand side, painting on the right, creating an iconic dialogue and unusual reverberations in the new double view. It is here that the folded gaze occurs, especially for the viewer of the viewer's view and the crease in the diptych become a rich space of return and exchange where the inside and outside dissolve. This shunting back and forward and sliding around the image gives the eye a glissando movement and mobilizes the imagery in a very discreet way, as if the movement of the image from the camera and the one created by the brush meet in the palpable play of the two pages becoming one and the viewer gaining access to the visual richness of the artists imagination by being so engaged.

Something which strikes one fairly immediately is the silence of the images, there is little human presence and something of an atmosphere of silence. The attention to moldings, architectural ornaments, and details are often a kind of play of part to whole and the painting as abstraction does not constitute a whole as reduction and making minimal as much as it seeks for an underlying structural essence. It is worth bearing in mind that the research on machines and seeing, colour and abstraction have been ongoing for a very long time and the centenary of Bauhaus brings it again to the forefront.

Wenngren has grasped this in his own methods, especially in the photographs, which are often close-ups, clearly momentary, and then cropped to the point where they often seem to want to burst out of the frame. This is a dynamic tension in which the balance and harmony of the image is held as in a bow stretched to shoot into a distant target. Intimacy and rest belong to the play of harmonic forces and are held as if in crystalline suspension, which only the viewer can release or even begin to re-compose. This can result in a delight of play and satisfaction at the refined making.

It should also be noted that there is sometimes a very urbane and witty response on Wenngren's part and a pleasure in forms and shapes. The double view, the twinning of painting and photograph becomes a form of dialogue, as one sees one, then double then triple and so forth, and as one sees them together in clusters one has the sense of constellations that jumble and comment on each other.

Recht Boomssloot is ostensibly the photograph of a street exterior and a joined gouache. However the two become more like one with four partitions and a new ambivalence arises as to where the abstract and the representational literally fold in the eye and forces and zones of focus and interest move around, slipping and then holding. Slowly the black circle seems instead like a fulcrum. The solidity of the gouache in broad blocks, as in Japanese prints, give a simple structural balance despite the quirky scale of the door on the left and the looming, perhaps, coal scuttle in the foreground.

Compare this to what is a view of a gable on Reguliersgracht in Amsterdam. It is the picture postcard typical bell shaped upper storey of an early Dutch 18th century house. The whole image is laid on a delicate cerulean blue with lightening white in the upper part, sky and horizon edge, whilst the exquisite tonal gradation creates a kind of surreal incomplete and new constellation with the abstract shapes mirroring and interpreting the formal shapes of the facade and windows. Again there is something free-floating, dreamlike here, as one sees the windows with casement partitions act as a signature of the system of proportions, like a modulor, and the curling end of the volute ornament is part of the baroque game of deception. Illusion in the chiaroscuro of the Amsterdam street city plan, the carved wood is a mimic of stucco and the stucco a mimic of marble or stone, all of which with sky reflected in the window. The house makes a strange hallucination of what is solid and seems to float and meld in moving water.  Here again the folding and folding in the look, the way dissolution and structure are visually rhymed and play.

In Hudson the polka dot of the Jack Russel terrier and the abstract registration of the nested map of the animal’s merkwelt, remind us of the way we are beings who notice and have attention in special ways.

In Hammershøj’s Strandgade one can also think of Caspar David Friedrich who often showed figures from behind, as if hesitant to deal with the direct human gaze. This is a very suggestive and poetic work, not least because it has a human figurative presence and not least because it captures the interval of hesitation in the light and forms of our habitation. We are perhaps never more shy than when we are alone, or, most hesitant. The importance of the 'grey-zone' is that it allows colours to take on their dynamic polarities rather than appear as prismatic effulgence mediating endless gradations. The usage of the medium in these works of painting point to a desire to stabilize, give more stubborn weight to the fugitive and ephemeral scene, capture in the 'moment' of the photograph and respond through painterly means.

In the Walking Man photograph a view through a window divides the exterior in slats. It is the famous room at Louisiana Museum Of Modern Art and with a stick figure, based on Giacometti's Walking Man, one is literally taking the view for a walk, out of the artfully contrived window. There is  the rendering of the apple-green rectangle with such smoothness it seems edible. This too is a folding screen, book-like, going back to the late antique revolution from the scroll to the book. Ancient forms, cultural denotation and deep roots retained even to the present. The printed book has its columns and space divisions, its margins and justification scale and utility, all of which relate to an architecture in the things we deal with every day.

In the Versailles Orangerie the formal garden’s arabesque swirls are echoed in the ornamental  graphic equivalence. This is indeed ‘something as something’ in which the double bind opens up allegorical meaning of the connection between culture and cultivation, of culture and nature, where in this sense the order of the world is of an assembling geometry. It is also the place of luxuriant planting and perfect artifice.

In Avinguda De La Reina Maria Cristina (Barcelona) the cypresses’ blackness contrast against the plinth which they surround as elongated oleander leaves and in the graphic adjunct one is seen again, truncated and turned towards the void of a pure white. The Lascaux Gouaches made in Zürich has a wonderful consistency and finish and are the artist's first choice throughout.

A final observation that can be made is how remarkable the drawing is of the shapes and forms, one sees the hand of the trained architect who never relinquished what he had learned. With all of this work it can be said, we learn to look and enjoy and feel the wellbeing of what it feels like to be at home in the world and in the freedom of play. 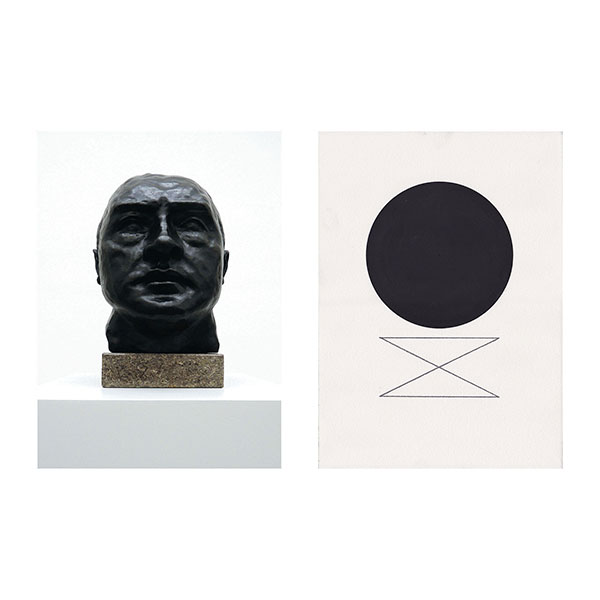 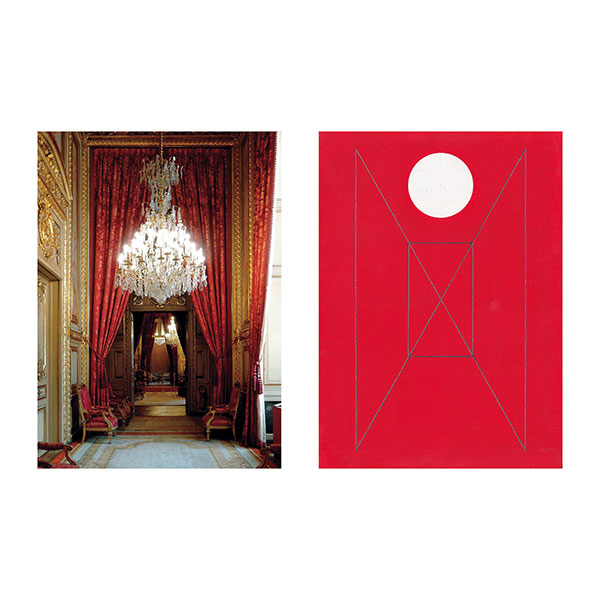 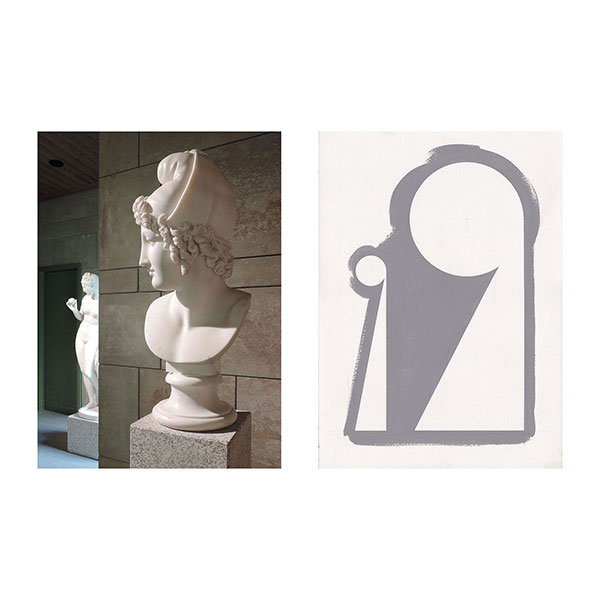 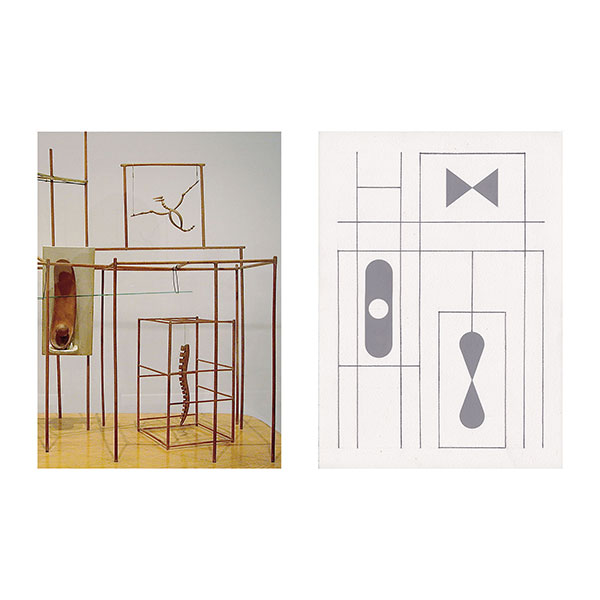 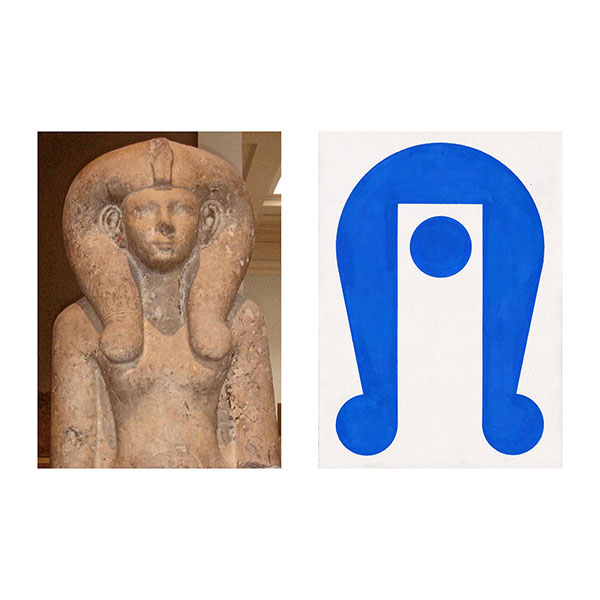 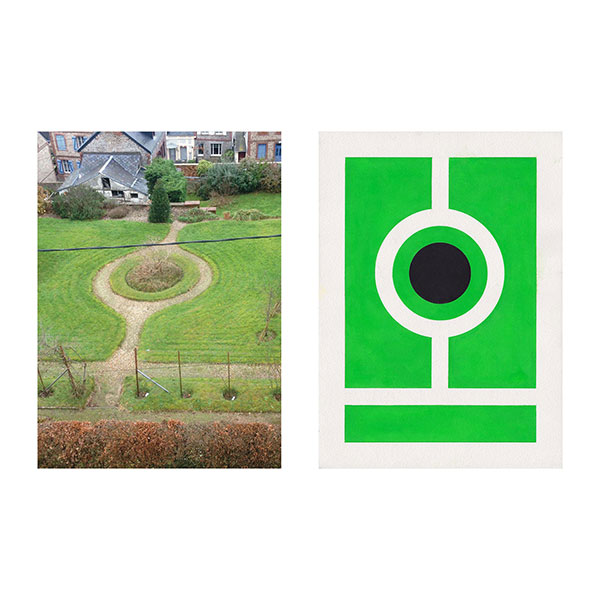 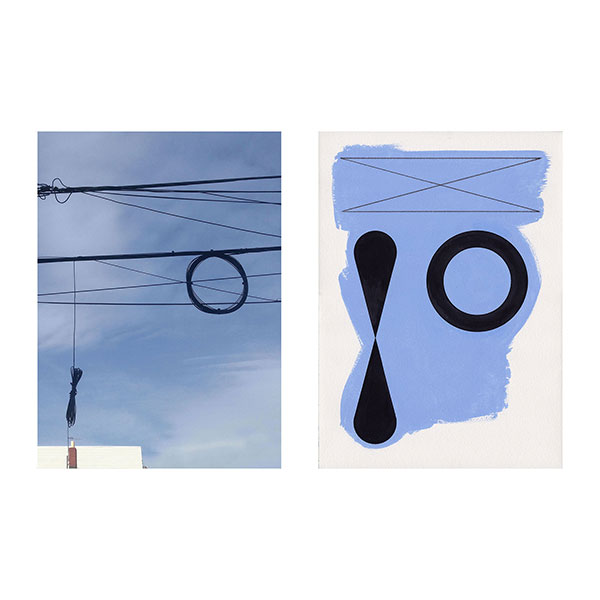 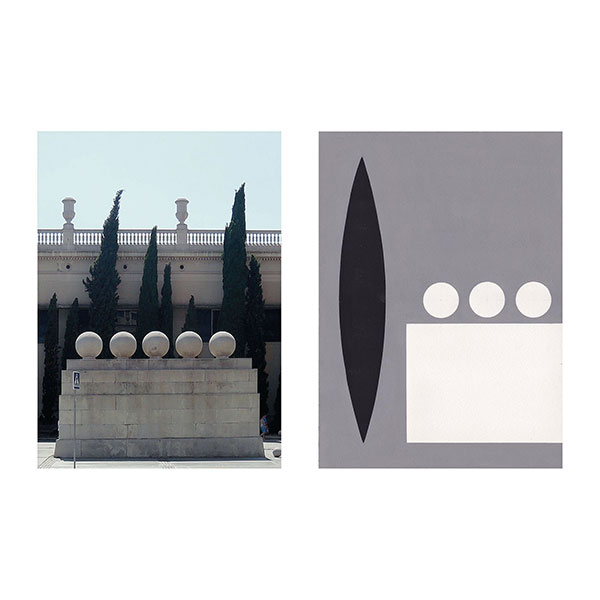 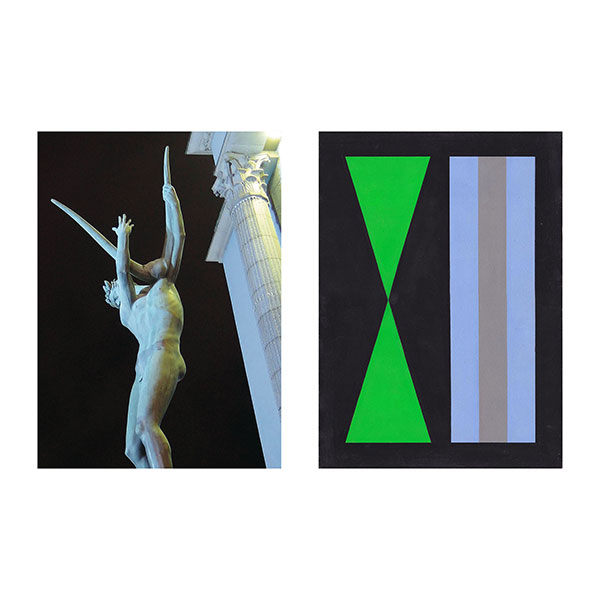 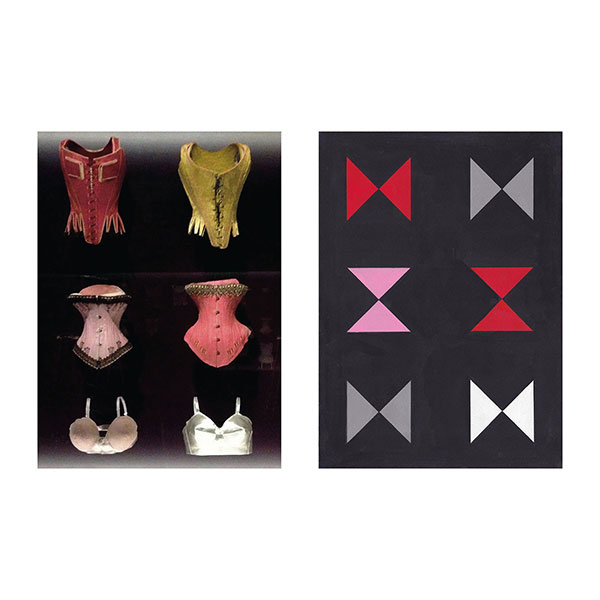 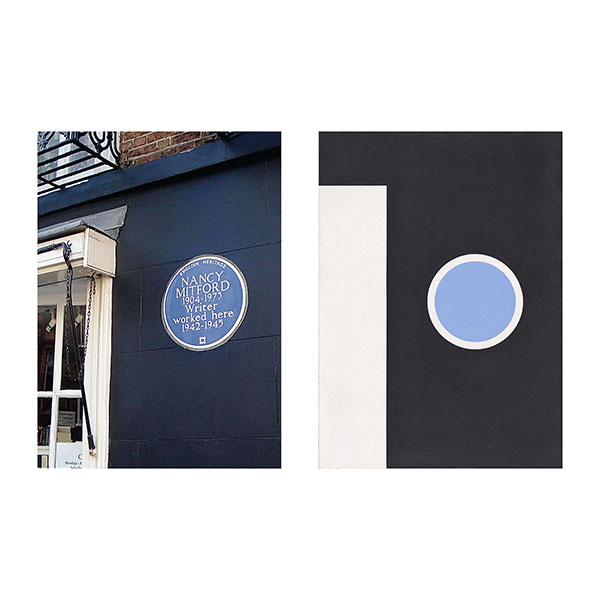 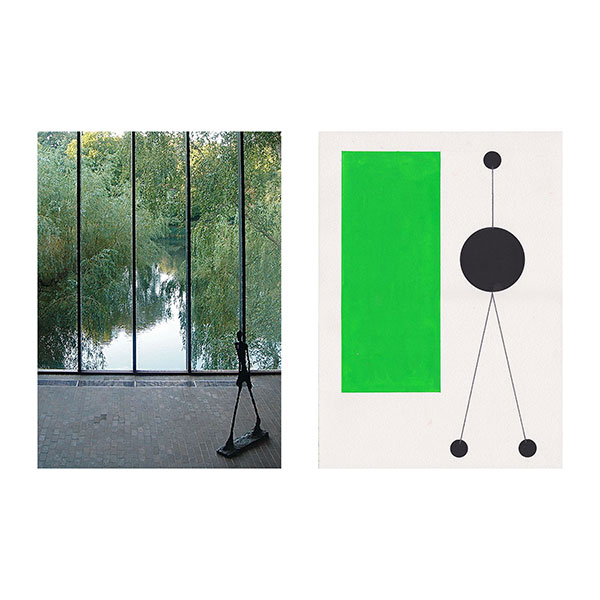 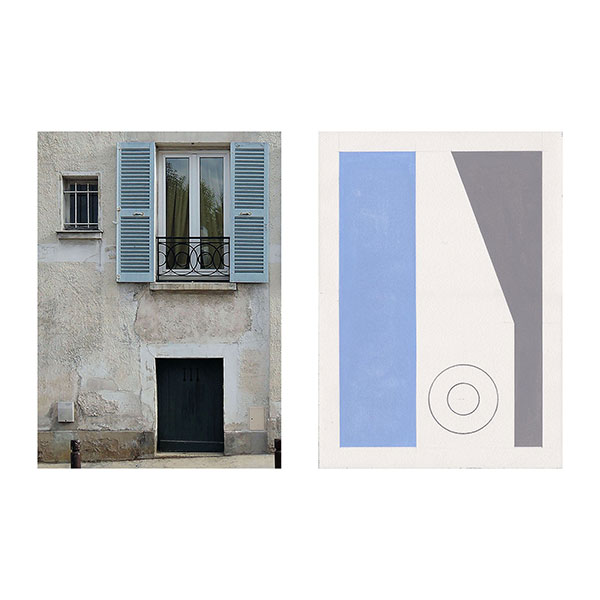 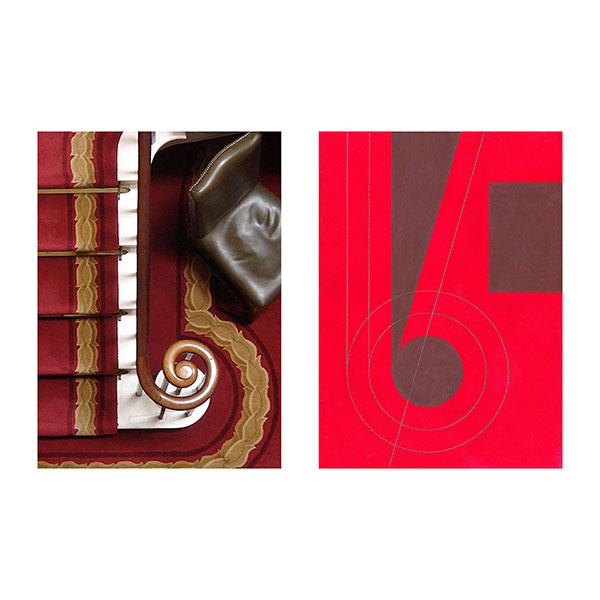 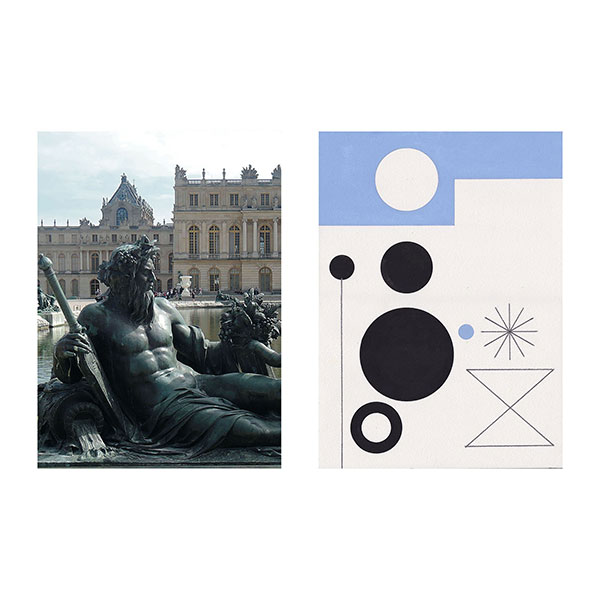 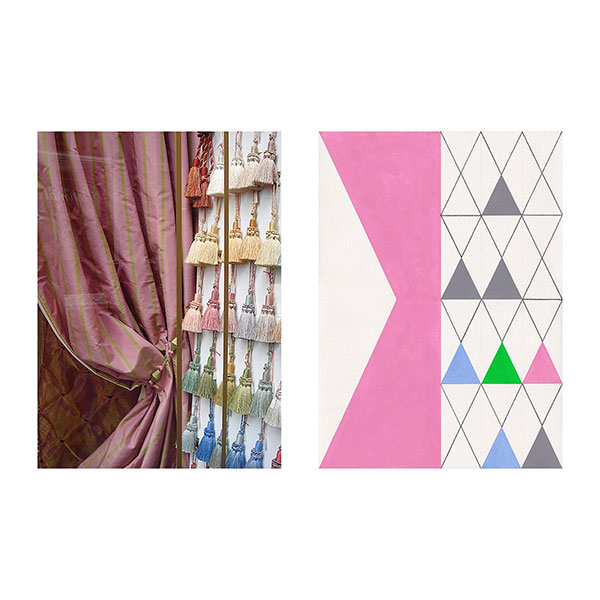 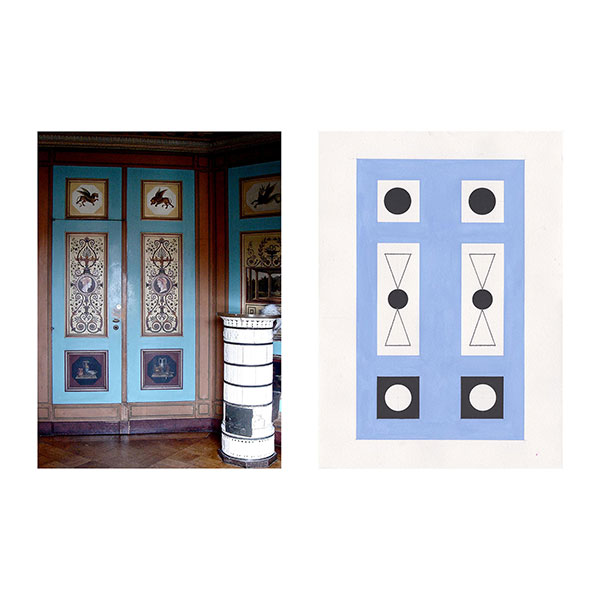 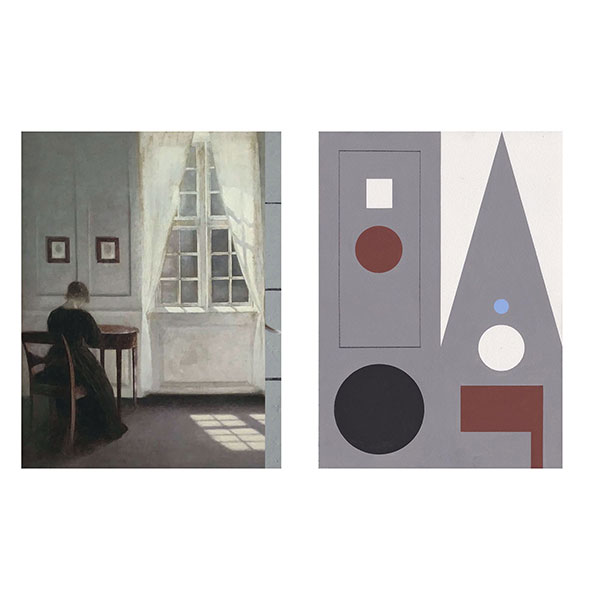 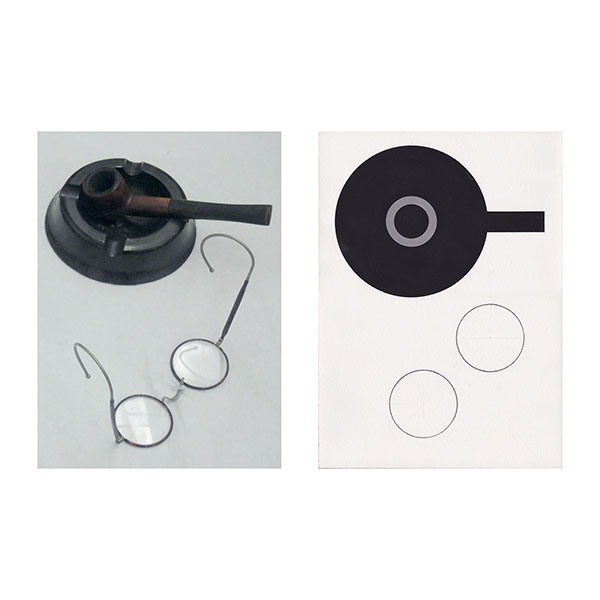 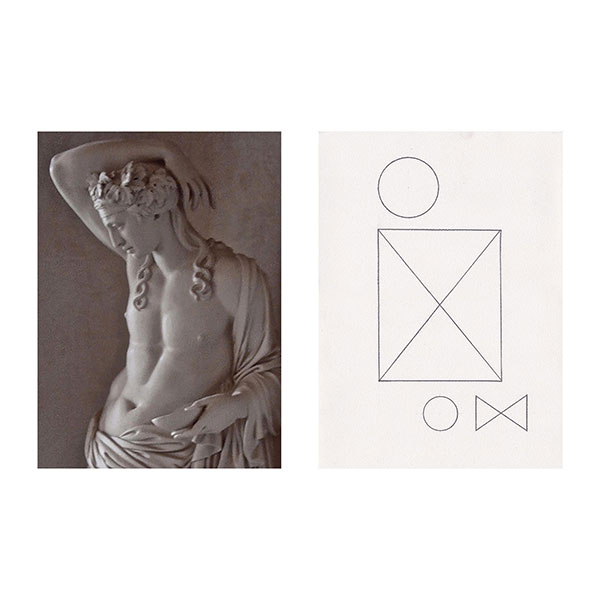 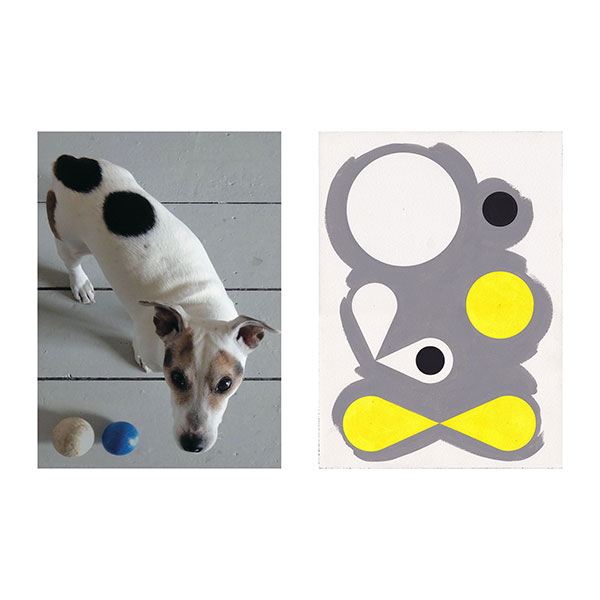 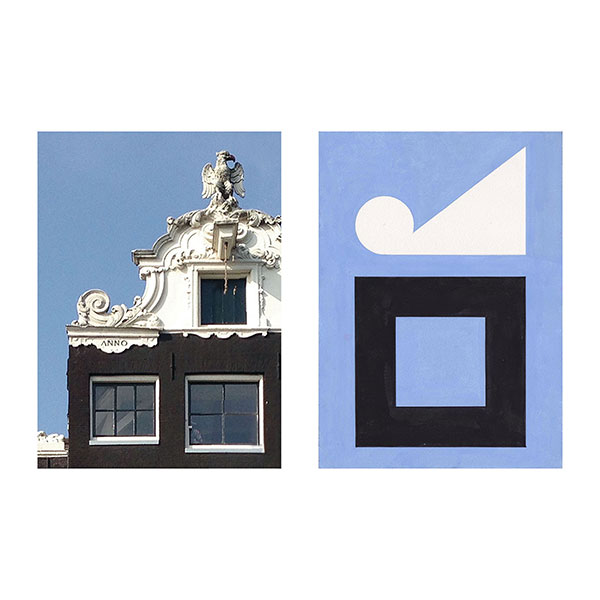 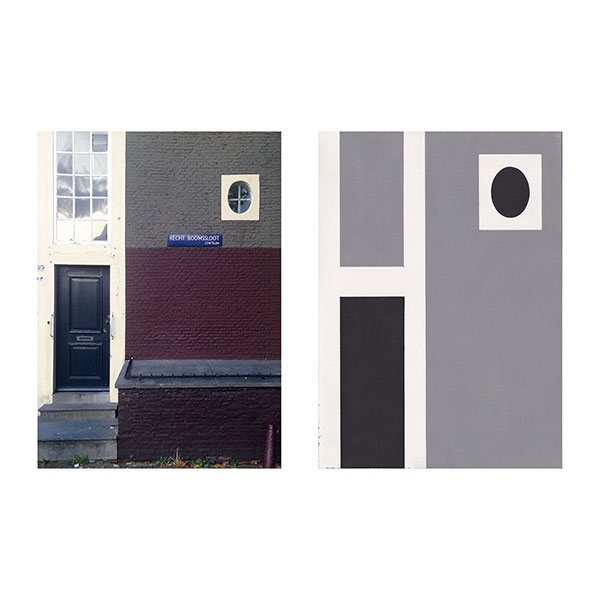 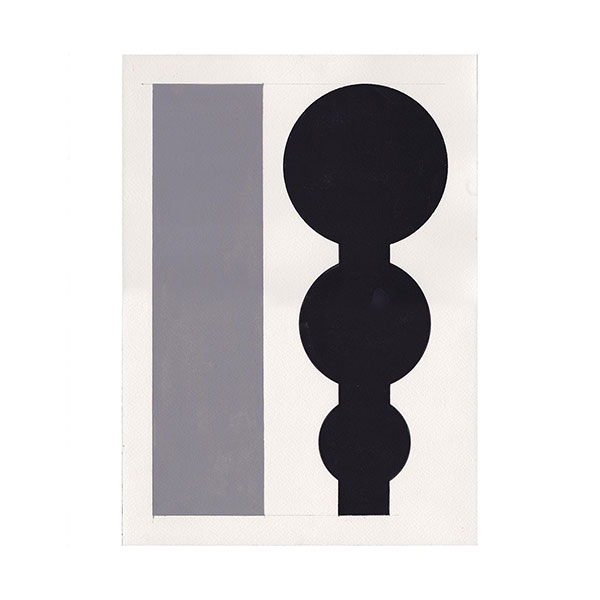 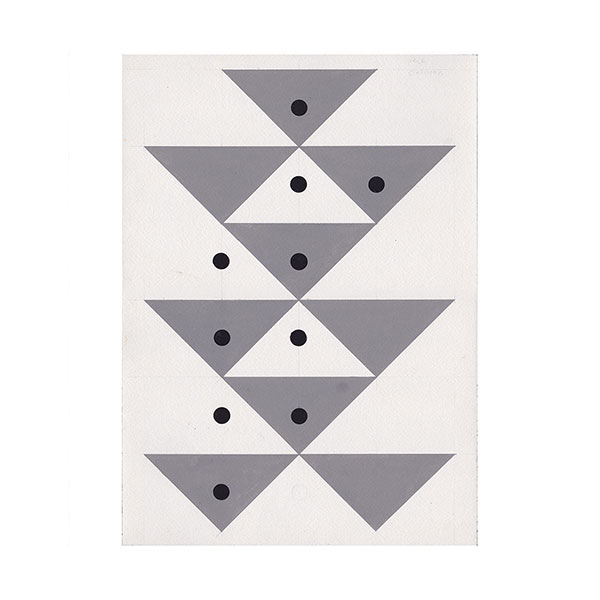 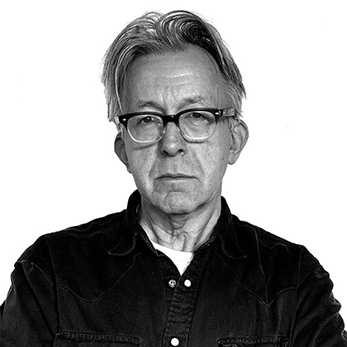