Philip Baldwin (b. 1947) and Monica Guggisberg (b. 1955) are widely recognised as two of the elite among today’s international artists working in glass.

After 40 years and dozens of international museum exhibitions, this show marks their return to Sweden, the country where their collaboration began. They met in 1979 in Småland’s Kingdom of Crystal – he was from New York, and she from Bern, Switzerland. Both had been students at the Orrefors glass school that year and it was there that their  professional and personal partnership took off. The strength of Baldwin & Guggisberg’s working relationship lies not only in their differing approaches to the creative process but in their ability to harmonise their thinking through their complementary skills.  Monica tends to kick off the process by making sketches – and by drawing and painting – she enjoys thinking with a pen or brush in her hand; while Philip prefers to look for solutions on the back of an envelope or through trial and error.

The resulting works are signed by both artists, and an outsider would find it difficult, if not impossible, to determine the originator of an idea. Any ambivalence or disagreement thrown up during the making process remains obscured; and their individual creativity merges into the finished piece. The first major monograph on their work, Philip Baldwin, Monica Guggisberg: In Search of Clear Lines by Susanne K. Frantz and Jean-Luc Olivié (Benteli Verlag, Bern: 1998), contains a description of their working partnership:

“We work in a world of interconnections. It’s a kind of three-dimensional tic-tac-toe universe in which events may appear to have a beginning, middle and end, but which may actually happen simultaneously, as if life itself were a hologram in which the past, present and future are intermingled. Whether or not one agrees with such a definition of things, it is plain that we are all constantly being influenced by the events and people and ideas that are perpetually swirling around us. Over the years we have tried to understand what it is we do and to ascribe meaning to it. For us this is harder than the work itself, for the work itself is organic and spontaneous and follows a trajectory all of its own.”

Baldwin & Guggisberg’s artistic evolution falls into distinct phases: first, their time at the Orrefors glass school and their two years as interns in the newly-opened glass studio in Transjö with master glassblower Wilke Adolfsson and designer/artist Ann Warff (later Wolff), two Swedish pioneers of the growing international studio glass movement, and a useful business model for Philip and Monica. Next, their objective was to find a space in which to develop their own work. They settled on the Swiss village of Nonfoux, north of Lausanne, where they lived for the following twenty years. The plan was primarily to make utility glass while developing the concept of form, function, economy and beauty, a focus borrowed from the cultural environs of Småland and Scandinavia. But they challenged themselves to push further, to confront head-on the problem of repetition (the strengths and weaknesses of serial production) and to find space for personal expression. At first their aim was to achieve flawlessness – to create, for example, a dozen perfect wine glasses; to achieve technical mastery. They describe how the glassblowing process became almost akin to a meditative process as they sought to reach a level of disciplined consistency similar to the practice of yoga. 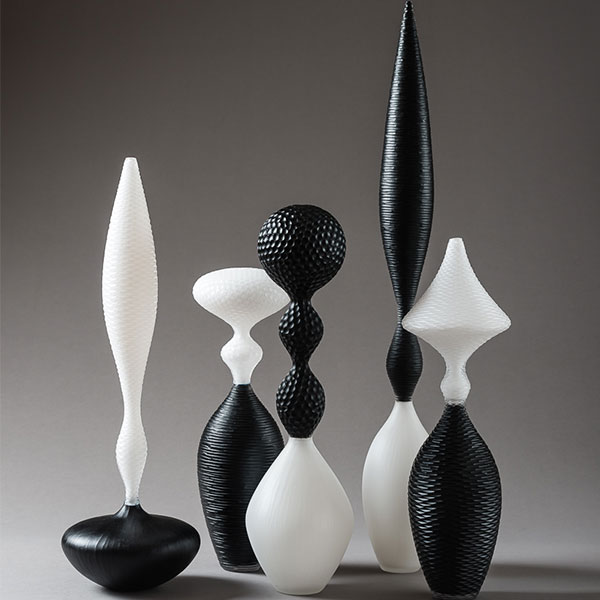 you, me and the rest of us