What do you want to know about Bertil Vallien that you don’t already know?
King of glass. The forests of Småland might be regarded as his kingdom.

But Bertil has a worldwide reputation; not least especially in America. Back in 1962 he was named as Young American of the Year in the crafts field by the Museum of Contemporary Crafts in New York. And he has since had a serious love affair with America for more than half a century. In 1983 his glass enjoyed an international breakthrough with an exhibition at the Heller Gallery, in New York and for a period of more than twenty years he has taught irregularly at the famous Pilchuck Glass School in Seattle. It is naturally in the USA that he has found his foremost collectors.

The path to the Glass Kingdom went via Konstfack - University of Arts, Crafts and Design in Stockholm. While studying there in the late 1950s he worked as an intern with the noted glass designer Erik Höglund who was based at the glassworks in Boda and who also, with his colourful designs, played a leading role in Swedish design. Bertil wanted to emulate him and, following three years in the USA, he returned with his wife, Ulrica, to the forests of Småland. He joined the Åfors glassworks in 1963 on a contract that allowed him to spend half his time designing glass for Åfors and half working as a free artist. And he has never ceased to mix designing tableware and working on his own art glass. Bertil’s handcrafted wineglass Chateau, which he signed for in the 1970s, still has unmatched sales figures.

Bertil Vallien’s skill has given him a patent on certain glassmaking techniques while his loyalty to the manual glass industry has been whole-hearted. In the shadow of business failures and shutdowns he has always contributed new sales success.

When, in the mid 1960s Bertil introduced sand-casting to the Åfors glassworks in his home village, he moved Swedish glass into unmapped terrain. He put crystal and traditional cut-glass, which had been crucial to glass production, aside because sand-casting offered more possibilities for the designer. Using wooden models he created a hollow in the sand which could then be filled with molten glass. When Bertil powders his sand moulds with various oxides he can give the glass a frosting of colour.

Over the years Bertil has frequently developed his relatively primitive casting technique, and he constantly stretches the limits of what can be achieved.

With his now famous boats he has created sculptures that have regularly tested his assistants with tough assignments. One of the most demanding challenges was when he cast his so-called Million-dollar boat. He aimed to show this at SOFA in Chicago which is one of the world’s leading design fairs. To witness Bertil’s performance – for he is a formidable performer in front of an audience, sometimes with musical accompaniment – on that occasion was like watching a thriller on TV. His concentration, absolute precision, the glances that he exchanged with his two female assistants… An unforgettable operation. Among his major discoveries (“My most important artistic assignment”) Bertil likes to name the altar screen that he created for Växjö Cathedral in 1999. This is a monumental work of light and darkness, more than four metres high and charged with innumerable glass objects taken from his childhood memories of Sunday school.

Those who are familiar with Bertil’s œuvre know that he constantly returns to three principal forms: the head, the boat and the monolith/staff. A fourth form might be the house or cottage. Early in his career there was also the horse which, nowadays, tends to turn up in his drawings and paintings. He often combines glass with metal and wood. A red thread and a letter of the alphabet that has strayed may appear.  Everything becomes a sign, rigid spaces with sunken shards of life. The boat seems always to be there and to sail in shifting forms through his head.

Over the years Bertil Vallien has exhibited all over the globe. In 2012 he had the opportunity to present a major inventory of his sculptures when he was invited to exhibit at the Palazzo Cavallo Franchetti next to the Canal Grande in Venice, the very heart of glass art.

Fifty years of production beneath the same roof, in front of a demanding public on the island of Murano. Director of the show was Adriano Berengo with his Berengo Studio on the island of Murano. Bertil had previously been able to visit the studio but on this occasion, in 2012, during the 13 Mostra Internazionale di Architettura, it was exam-time for the Swede from suburban Sollentuna in Sweden.

The exhibition entitled Nine Rooms was a huge success and provided the ultimate proof of Bertil’s international status. A few months ago. before the Corona virus had paralyzed the world, Bertil flew to Florida where he was to receive two prestigious awards. Imagine Museum declared him Artist of the Future, while the Glass Art Society (GAS) gave him their Visionary Award – one of the foremost titles that a glass artist can get. 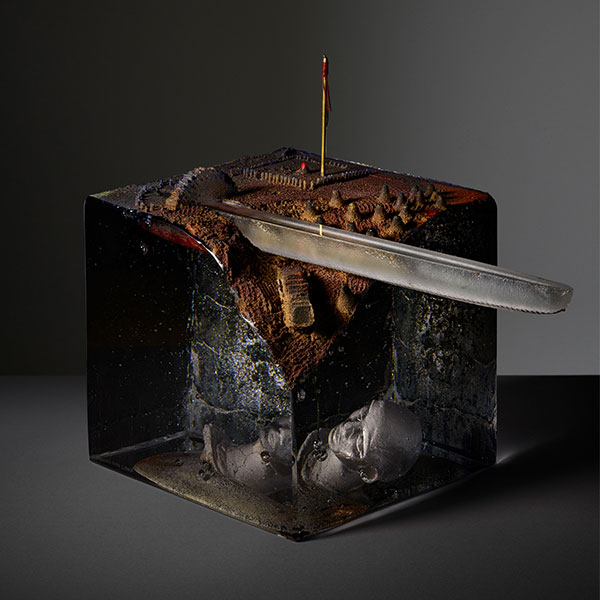